A unique dinner experience in Lofoten

After exploring Henningsvær our apatite has increased and so we will start our journey back to Svolvær and serve our dinner from our local partner restaurant in Henningsvær. A menu inspired by local produce and traditions. It is a joy to taste while being able to admire the scenery of Lofoten through our floor-to-ceiling windows with panoramic views. Order a drink and go out onto our one of our deck to enjoy the silence of our electric engine and get closer to the elements of nature.

During the majority of the summer it will still be light outside on the way back due to the midnight sun. The magnificent mountains nicknamed “the wall of Lofoten” will cast its shadow on us. As the sun is lower and lower on the northern horizon, the evening light will colour the backdrop of these craggy peaks the highest of which, Vågakallen, towers over 800m above sea level. Its sight is unequalled in Lofoten.

Know before you go

Travel to Henningsvær the traditional way; by boat

Henningsvær and Lofoten as a whole have traditionally only been accessible by boat. Only since 1983 is there a land connection via 2 bridges. This has made Lofoten and Henningsvær more accessible and during the summer the road is filled with cars and campervans. However, there is a certain charm by traveling to Henningsvær by boat. It gives you a view of Lofoten that you don’t see from the road and it allows you to immerse yourself into the way the locals experienced life in Lofoten for centuries.

The rich fishing history of Henningsvær

Fishing is so much part of Henningsvær that it is even in its name. The word “vær” – “fiskevær” in the northern Norwegian dialect literally means fishing village. For over a century people from around the country came up to Henningsvær in the winter months for the fishing season. Most famous is the cod fishing and year after year it has become more famous. Nowadays Henningsvær and Lofoten in general exports fish all over the world. From dried fish to Italy and fish heads used for fish soup in Nigeria. While Henningsvær itself is still involved in fishing, many of the warehourses and fish factories that are facing the port have been restored and converted to hotels, galleries and restaurants, providing work for the people of Lofoten during the summer months when there is little fishing.

How much free time do we get in Henningsvær?

In general, you will have one and a half hour in Henningsvær and we will try and stretch our schedule to accommodate this but sometimes it can little less. We will try always offer at least 1 hour. It depends on what our arrival time is in Henningsvær. This can sometimes be a little later due to the weather and wind.

What is the dinner menu for the Henningsvær Dinner Cruise?

We serve a 3-course dinner on the Henningsvær Dinner Cruise. The starter on the way over and the other 2 courses on the way back. It is prepared by a local restaurant in Lofoten and the menu is a modern twist on traditional Northern Norwegian culinary dishes. Because we use local and seasonal ingredients, the exact dishes change from time to time.

Do you have a vegetarian menu for the Henningsvær Dinner Cruise?

Yes we can offer a vegetarian option. However, you need to inform us about your dietary restrictions when you make the booking. The latest you should inform us is 1 day in advance so that the chef can prepare accordingly.

What is the midnight sun?

The midnight sun is a natural phenomenon where the sun does not go below the horizon and is thus visible at midnight. The midnight sun is only visible during the summer months towards the poles on either side of the earth. On the northern hemisphere, this only happens above the arctic circle, or approximately 66 degrees north.

When and where can we see the midnight sun in Lofoten?

Not everywhere in Lofoten it will be possible to see the midnight sun, as it goes lower over the northern horizon, meaning that on the southern side of Lofoten the mountains often block out the view of when the sun is lowest. Furthermore, the lowest point of the sun is technically not at midnight, but often later at night.

Join our Henningsvær Dinner Cruise this summer! We know you want to! That bright orange “Book this tour” button has been following you all down this page, just ready to be clicked! A evening dinner tour with us will not disappoint! Our hybrid-electric ship is designed with comfortable and spacious saloons, perfect to enjoy your dinner. The floor-to-ceiling windows will provide you with panoramic views of the mountains of Lofoten. With our silent electric engine, we limit the noise and disturbance, providing a calmer experience for both you and nature. 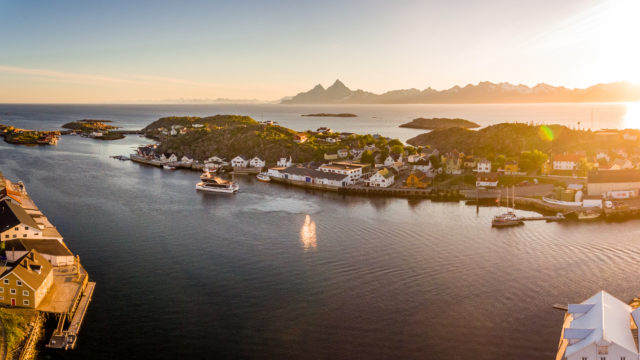